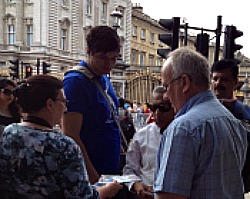 When we were first approached with the idea of distributing books containing a Gospel message to people in London during the 2012 Summer Olympics, we were immediately interested. What better way to reach people from all around the world who would be in one place at one time? Right away, we began to make plans to be a part of this exciting ministry.

For almost 2 years, we planned this trip with great anticipation. We were aware that it would not be a vacation… it would be work! We asked for your prayers and your support, and you helped us be there in London to put a book in the hand of someone whose life will be forever changed because of that simple act. We thank God for the opportunity to spend 9 days out on the streets of London spreading the Gospel message.

Each day, immediately after breakfast, we packed our suitcases full of books (they were HEAVY) and headed to the Tube (London's subway system) for the ride into the center of the city. We went where the crowds were: near Parliament, Big Ben, Westminster Abbey, the Tower of London and Buckingham Palace. we stood on the sidewalk or in a park and offered the free book to everyone that passed by...and there were throngs of people!

Most of the time, we couldn't keep enough in our hands to supply those who wanted a book! Usually, the teams sent some of the team members back to the warehouse to get additional books, because we would run out quickly! 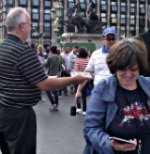 It was truly amazing what God helped a few people to accomplish! During the first week of the Olympics, there was a team of 23 people, and then during the second week (while we were there), there were 39 of us. God helped us to distribute 427,000 books in just two weeks!

People who received the book can visit this website where they can find excellent discipleship material to help them gain a better understanding of the ideas presented in the book, or to develop a deeper relationship with God.

We also tried to keep track of the countries that we reached. We know that we gave a book to a person from at least 140 different nations! Only eternity will reveal the results of this outreach!

﻿To God be the Glory!

Dr. Connie Palm wrote the small book, LONDON, in simple English based on the life of Eric Liddell, a Scottish Olympic athlete, who set records in the 1920’s, and who was faithful to his convictions regardless of the possible cost. His story is the basis for the award winning movie, Chariots of Fire. The book was published by Gospel Publishing Mission in this very attractive format.

Additional books were distributed during the Paralympic Games bringing the total number of books distributed to over 500,000.

Return to Hope for Eastern Europe from Olympics